As a home-educated student in the 80’s and 90’s, it was never really in my mind to go the traditional route to college or university. Frankly, I didn’t think a post-secondary education was really necessary. I obviously have a different view on that now and understand the need for many occupations to have that kind of education, but I also see many young people that have more of an aptitude toward technical schools and the trades and I believe this can be an equally good option. I, for one, decided on apprenticeship through trade school. Here is some of the history that led me there:

Perhaps I had it easy, or it may have been due to my parents’ insight into my interests and abilities, but I knew at a fairly young age that I probably would make my living working with my hands. If I wasn’t fiddling around during school or wanting to do cross-stitch (can you believe it?) like my older sister, I just wasn’t happy. Always wanting to build something, I would take dad’s handsaw and hammer, then saw away until a shape appeared and I had my “work of art.” Next, I began my plan to make a bunch of these sorry-looking objects, and figure out how much money I could make if only I had customers to buy them. Needless to say, my work did not become saleable for a few more years.

When I was nine or perhaps ten, Dad saw how much I was struggling to make anything that involved more than two pieces put together, so he suggested that I take the money I had made from my lawn mowing jobs and buy a little bandsaw. It was from that point that I really started to enjoy working with wood. At first, I was only allowed to use the bandsaw when Dad was home (which was hard to wait for), and then as I proved myself, I was able to work alone in the garage that was quickly turning into my little shop. I soon discovered other tools that I needed and so my collection slowly began. Perhaps I should just point that the tool collecting never ends, especially for the professional.

Because my parents home-educated all seven of us children, they were able to allow each of us some time in our schooling to pursue some of our special interests which in my case was woodworking. My “shop time” became a great opportunity to build various projects that I saw in magazines and make as gifts for family, including toy trains, doll houses and wooden shelves. Dad kept his watchful eye on me when he was home and as each new tool was added to the collection, including many of his own purchases, he would take the time to make sure I understood the safety aspect of each one. I have to say that I have been blessed to have not had any serious injuries in all my years in this trade, although there have been many “close calls” and lots of blood.

My interest continued through my early teen years and I began to sell my projects to other people through craft sales and word of mouth, doing some custom work that involved building blanket chests, bunk beds and various kinds of furniture. It was during this time that our family moved from British Columbia to Alberta and we built a new house on the acreage my parents bought. Although I won’t go into detail, I will say that all four of us boys learned a lot during the house-building as we did pretty much everything ourselves - including my favorite part, which was the building of the kitchen cabinets, my first of many.

Building the family house was a great experience for me as I got to do many of the trades involved and because of that, I decided to try out framing for a time. Although I enjoyed the experience, I realized that I liked fine woodwork much more. It was around this time I took a few months and volunteered in the U.S. at a children’s orphanage in their woodworking shop building furniture for the kids. It was a great experience and besides feeling like I helped out, I also learned a lot and broadened my perspective and scope of work.

I still knew there was more to learn than what I already knew, so for another year I worked for a few different cabinet shops in town. The last one I was in made an offer to apprentice me and put me through trade school if I would stay with them until I finished the training. With apprenticeship, you typically go to school for two months and then work the rest of the year for your employer accumulating accredited hours. At the time, I wasn’t sure if I really needed to go that route, but after some prayer and consideration I agreed and started the process. I think at the time I just wanted to make sure my knowledge of the trade was as complete as I could make it and to feel I had explored every opportunity that was readily available.

After a fairly basic entrance exam, I was accepted into the program, although I had a bit of a concern that I would have a hard time adjusting to a different education setting than I was used to. Because I was home-educated my whole life, the experience was indeed different, but in no time I felt very comfortable and was having lots of fun. The classes were fairly relaxed and because the demographics were quite diverse (from just out of high school to older adults making a career change), there was a great communal atmosphere, with plenty of help from classmates when necessary. I took the first year in Edmonton at NAIT, and then the third and fourth years at SAIT in Calgary (because my soon-to-be wife lived there). I fast-tracked the whole process somewhat and challenged my second year to shave down the length of time. Fortunately, I had enough of the required accredited hours to do that.

After all was said and done, I was very happy with how I did in shop class and in the other academic studies. I think my home education background was a definite plus and helped give me the self-discipline to give it my best effort. I also discovered that those who apply themselves can get awards and scholarships that can help pay for schooling - yet even more motivation. Although it may not have been necessary to get my ticket in cabinetmaking to get a job in this field, I feel it can be a big advantage. For one thing, when someone has their ticket in a certain trade it tells others that they were willing to show commitment and discipline to finish something to the end (employers like that). It not only tells a potential employer of your abilities, but it will also add some monetary value in accelerating your pay scale as well. For the self-employed, it tells customers that you are knowledgeable in what you do (or at least should be) and that they can have confidence in the quality of your work.

Since getting my journeyman’s ticket, I have set out on my own and have a small custom cabinet shop, building mostly custom kitchens and wall units and enjoying a full workload. Yes, it can be challenging at times, but I feel confident in what I have learned and am growing through the many invaluable life experiences. I am grateful for the formal training in this trade, but it is the assurance of God’s guidance that sees me through each day. 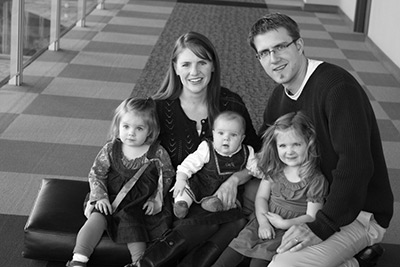 Cameron lives with his wife Lisa and their three daughters in Lethbridge.