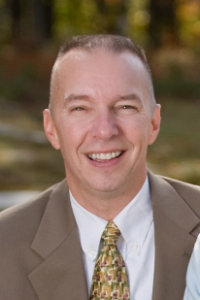 Steve was born Oct. 21, 1960 in Royal Oak, Michigan. His parents worked for the Michigan Central Railroad and lived in a modest home in Livonia, Mich. In 1972, Steve and his mother moved to Chadds-Ford, PA and Steve graduated from Unionville High School in 1978. He earned a B.S. in Economics from West Chester University in 1982. Upon graduation, he joined the U.S. Navy and was commissioned and trained as a pilot in 1983-84. He married his college sweetheart Megan, in July of 1984 and they began a life together that to date, has included eight children and 15 moves. Steve was deployed three times in four years flying the P3 Orion. Steve left active duty in 1991 and was hired by American Airlines the same year. He currently flies the Boeing 777 out of JFK Airport normally flying routes that take him to Europe and beyond. His total flight time is well over 12,000 hours.

In July of 2000, Steve, Megan, and the family, moved to Georgetown, Maine where Steve founded Cornerstone Baptist Church. The church has grown over the years and current attendance tops 225 per Sunday service. Steve remained active in the Navy Reserve. In 2001, Steve was asked to design and teach a course in Navy Core Values. The course has found broad acceptance and Steve is a highly sought after trainer and motivational speaker. More than 10,000 service members have attended his Core Values seminars, since it’s inception in early 2002.

Steve and Megan are instrumental in the lives of young parents. They have developed a parenting course entitled Parenting Matters; The Nine Practices of The Proactive Parent. They travel extensively, teaching weekend parenting seminars. Steve recently adapted and taught his Navy Core Values training to the entire student body and faculty of Clearwater Christian College in Clearwater, FL. He is also the author of several books and studies.

Steve and Megan have been guests on Family Talk with Dr. James Dobson and The Glenn Beck TV program showcasing their Nine Practice of The Proactive Parent. In his spare time, Steve sleeps, watches the Red Sox, and drives his children to sports practice, all while attending weekly meetings of Overachiever’s Anonymous.

In 2012 Steve retired as a Commander from the U.S. Navy. He is currently a First Officer for American Airlines. He recently retired as Senior Pastor of Cornerstone Baptist Church of Topsham, ME. to become the President of Characterhealth Corporation; a non-profit conference ministry aimed at equipping parents to train the next generation of character-healthy leaders.

Second mile leaders are those counter-intuitive servants of God who earn the right to be heard by developing a consistent love of virtue, a disciplined approach to gratification, and a submissive love for the authority of God’s Word. Male leadership is essential to the success of marriages, families, the church, and society. This session will teach men to Earn the Right To Be Heard, Prefer Proactivity, Reject Reactivity, Learn To Elevate Virtues Above Feelings, Build Moral Muscle, Seek Forgiveness, and Develop A Finisher’s Attitude. Powerful.

Living On Borrowed Time: The Nine Practices Of The Proactive Parents

As a pilot for American Airlines, Steve was very close to the events of 9/11. Steve was originally scheduled to be the co-pilot on AA Flight 11, the first flight to be hijacked on Sept. 11th, 2001. Through an extraordinary set of divine circumstances Steve was bumped from that flight the night before by a more senior pilot. Now, he tells his deeply moving story of God's providence on that terrible day in our history. Come discover why God gave Steve a second chance, and how He now uses him to teach parents all around the world to parent with purpose and urgency, as he introduces you to The Nine Practices of The Proactive Parent. Intensely practical and Bible based, the Nine Practices of The Proactive Parent is designed to give parents both the tools they need, and the necessary hope, to build a Christ-centered and character-driven home environment. The Nine Practices are a great way to revitalize parents in the all-important task of parenting. This session will take highlights from the 10- week Parenting Matters small group study. Steve will unwrap the Three Pillars of Parenting, The Motivation Model, The Growth Continuum, The Proactive vs. Reactive Parent, and more.

Training Teens To Take The Initiative

Want to transition your young adults from simple obedience to mature responsibility? In this session, Dr. Steve shares the important phases that teens need to learn in order to take responsibility for their lives. Watch your kids move from childish irresponsibility to becoming young adults who embrace ownership and initiative as they move up the “Responsibility Tree."

Want your teen to take more initiative around the house? Want to reduce the “Drama” level in the family? Want to get your pre-teens, teens, and young adults excited about character healthy living? Join “America’s Parenting Doctor,” Dr. Steve Scheibner as he reveals seven practical steps to raising the behavior bar in your home. A Character Matters session will begin the process of moving your young people from ordinary to extraordinary.

Recognizing that a healthy marriage is the basis of a healthy home, this Marriage session is a fun and fruitful way to invest in your marriage relationship. Steve and Megan teach from their book The Eight Rules of Communication for Successful Marriages and finish the session with a fun-loving look at marriage and F-R-I-E-N-D-S-H-I-P Practical advice in a guilt free environment make the teaching real and applicable to all those in attendance.